"Robotics as an API in a modern programming language" 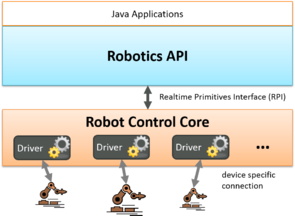 With the Robotics API Development Platform, you can program complex, real-time critical tasks for your robots in Java. A convenient, flexible programming model enables you to develop sophisticated applications easy and fast. The innovative software architecture of the Robotics API Development Platform ensures reliable execution of robotic applications and guarantees exact timing of critical operations.

Using Java as a robot language has various advantages. You will profit from a modern, object-oriented programming language, hundreds of existing libraries and elaborate Integrated Development Environments. Development of the Java ecosystem is actively driven by a large community, ensuring that the language will evolve in the future.

The Robotics API Development Platform consists of two separate architectural tiers: Applications are running on top of the Java-based Robotics API, while real-time critical device control is done by a Robot Control Core (RCC). The RCC has to run on a real-time capable operating system which can communicate with all hardware devices via the respective buses and protocols. Robotics API applications can run on any Java-capable operating system on any hardware, as long as it can communicate with the RCC via network. For simulation purposes, and to control devices that do not require hard real-time control, a Java implementation of a Robot Control Core is bundled with the Robotics API 2.0.